Has it been 3 days since my last post? Wow time flies! We were at a wedding Saturday and then spent Father's Day at the ball diamond. Here are some pictures of Joel and his bride Ashley:

Groom's Uncle, Mom and Uncle
We had a lovely time! Best wishes for a happy future Joel and Ashley!
While we were at the wedding my sister was looking after the kids and brought her new dog, a 4 pound chihuahua named Chico.

the boys team is out of the playoffs, Blake had a brutal game and he was very disappointed in himself. It's the only bad game he's had out of 20 games played this year. Poor guy was in tears but the whole team played poorly so the loss wasn't any one persons fault. On to other things now.  Both boys are trying out for the All-Star team in their respective age groups. Jack will be playing AAA Minors All-Stars. As he played last year he is on the team as a returning player. Blake is trying out for the Majors A/AA All- Star team (11/12 yr.olds). If he makes it we will have an exceptionally busy July but Ray and I are okay with that. Blake making the all-star team would lift his confidence and self-esteem astronomically!! He has practices Saturday, Sunday and Monday. The team will be selected on Monday. Good luck Blake!
The other day Blake asked to play games on his iPod touch and set up Cole to play my iPod touch.

So cute seeing them both playing, even though I'm sure Cole has no idea what he's doing. Yes I admit I'm crazy allowing a 2 year old to play an iPod touch.
This is the kids last week of school so all their workbooks, duo-tangs and projects are coming home. Here is Peyton with here first big research project:

Their last day will be Thursday and then they will spend the weekend with Grandma D. while Ray and I are in Kelowna.
Phew! What a long post but now we're all caught up. I'll have at least one scrapbook project to share tomorrow!
Posted by Rosie at June 23, 2010

I'm holding my very first cardmaking workshop as an Altenew Certified Educator! In this workshop, you will learn to create multiple ca... 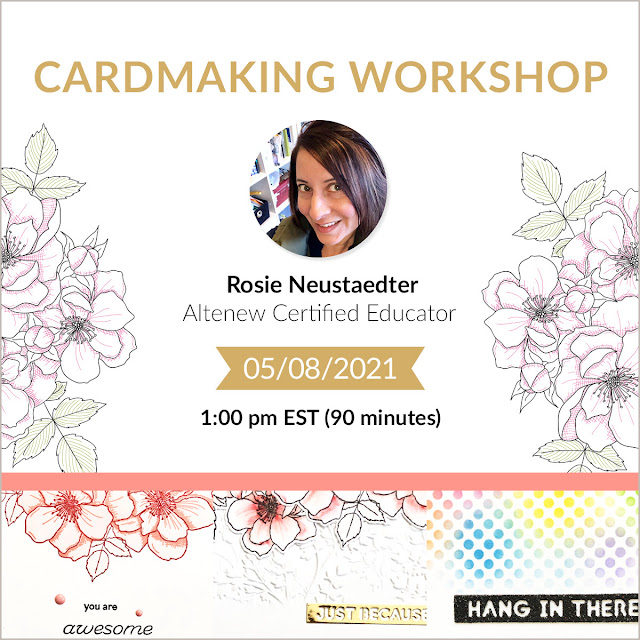